EVOTING IN THE PRESS 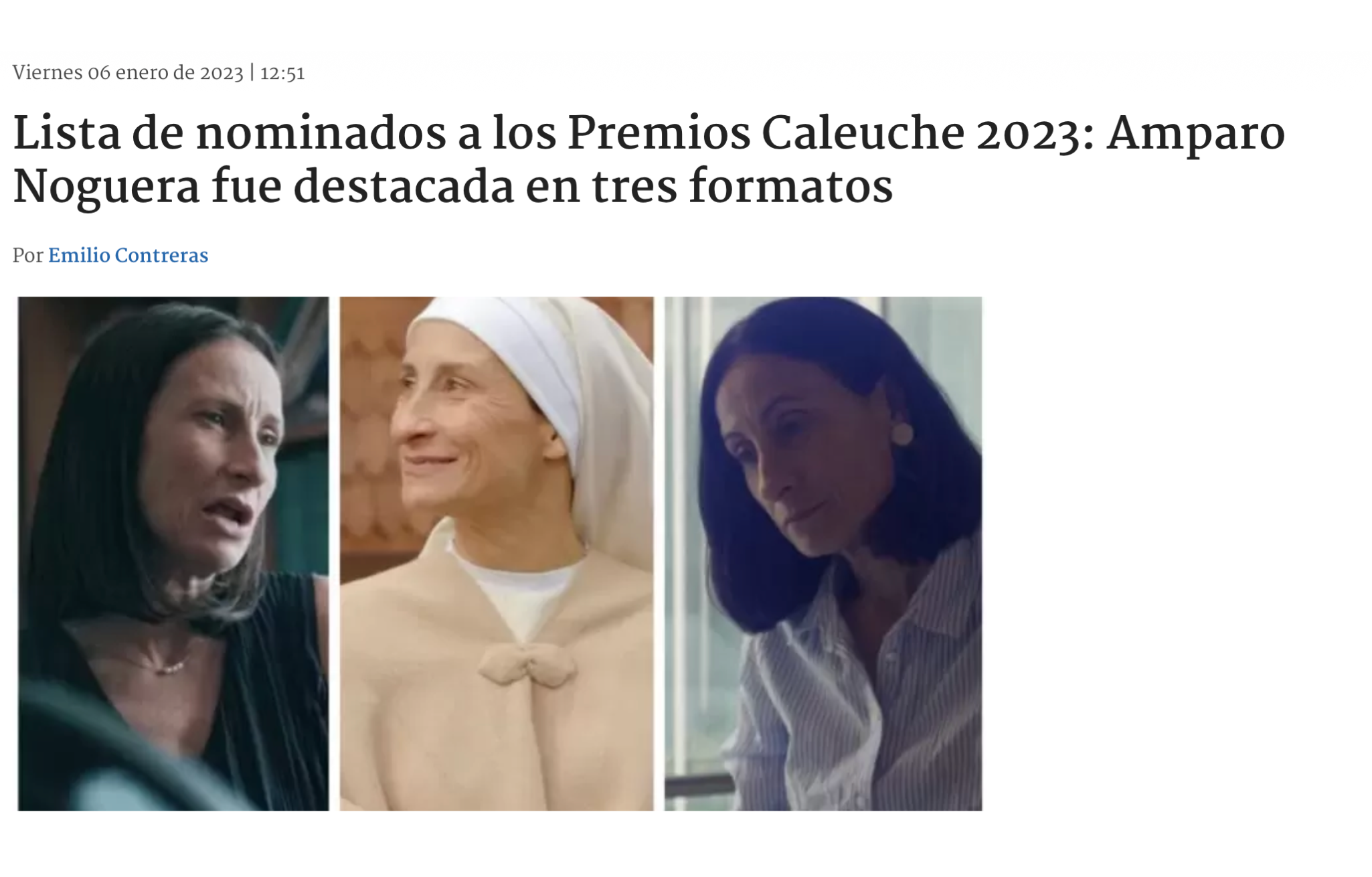 List of nominees for the Caleuche Awards 2023: Amparo Noguera was highlighted in three formats

The Caleuche Awards 2023 will be broadcasted on open TV and will be hosted by Javiera Contador. 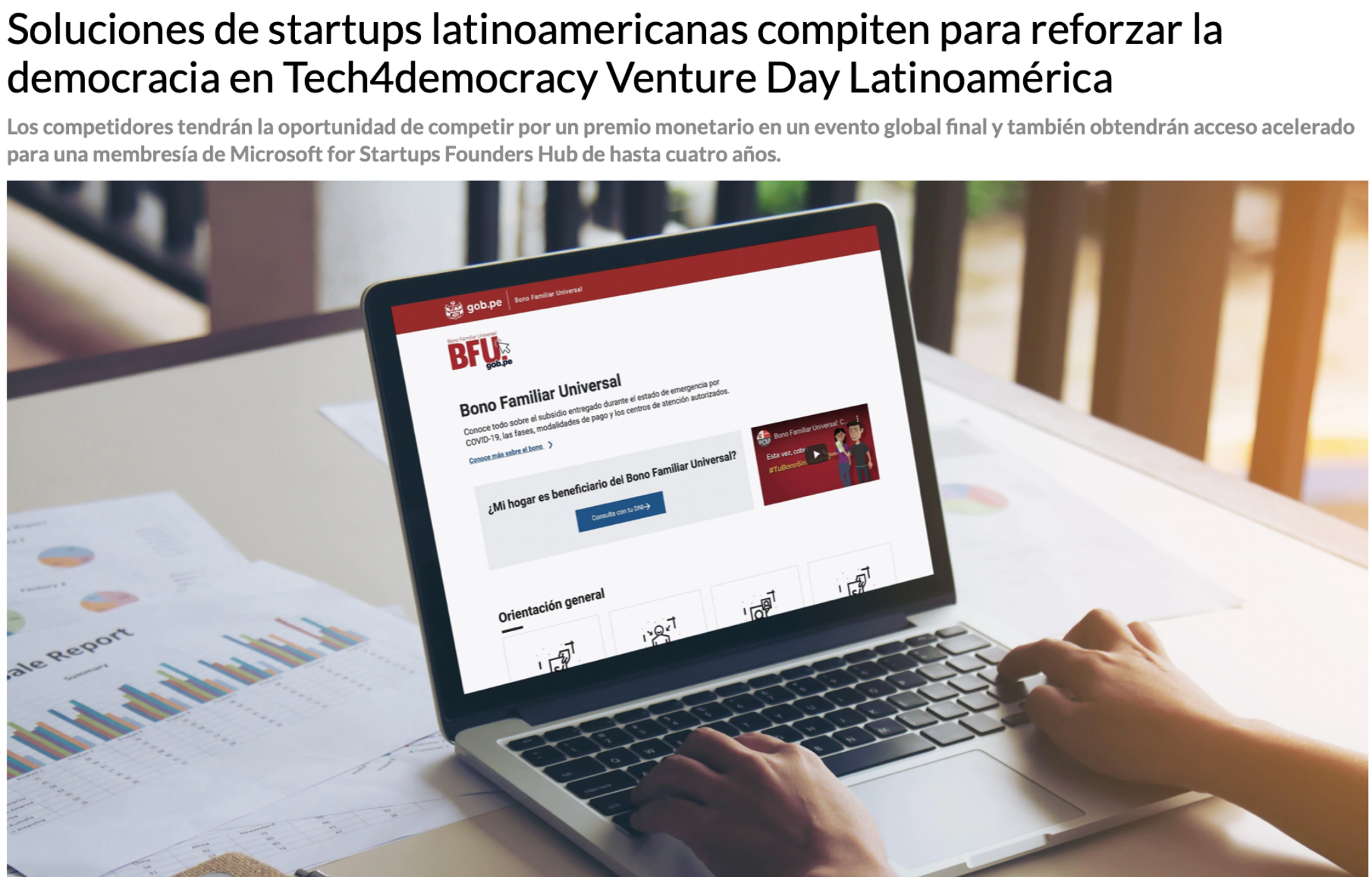 Competitors will have the opportunity to compete for a monetary prize at a final global event and will also gain accelerated access to a Microsoft for Startups Founders Hub membership for up to four years. 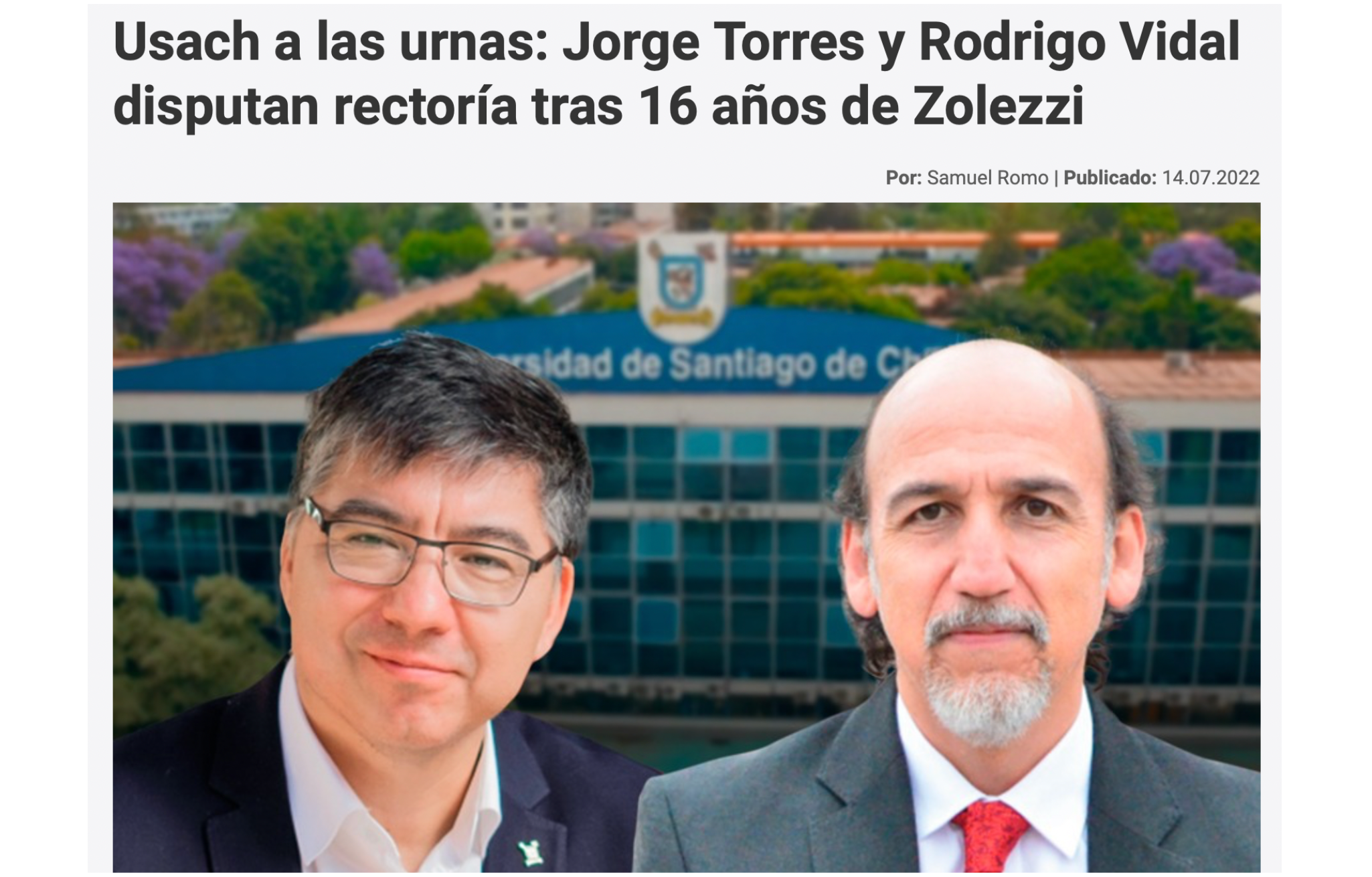 The election for the new rector of the University of Santiago de Chile will be held on July 7. 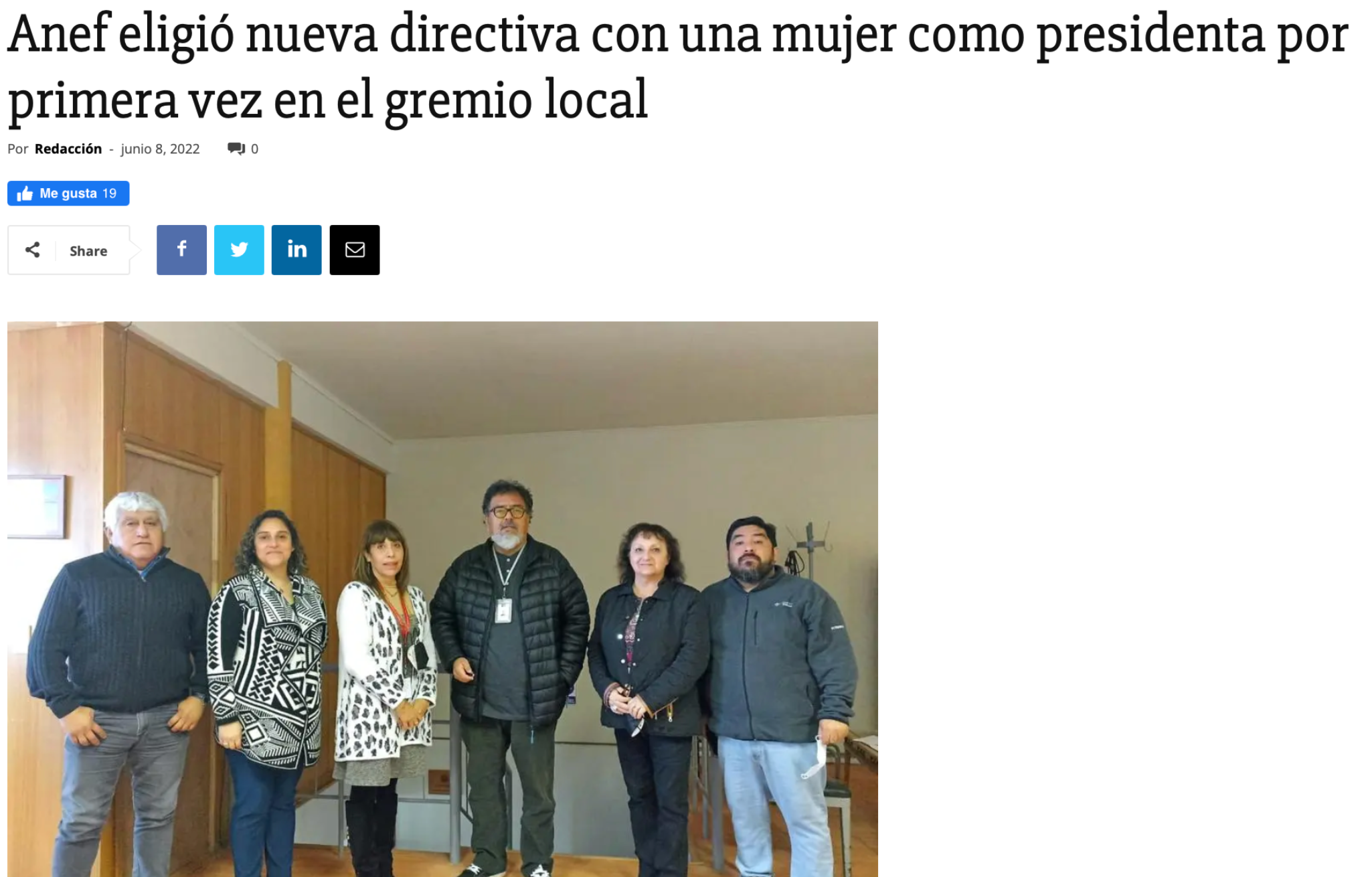 Public workers in the Antofagasta region renewed the Anef's regional board for the 2022-2025 period, through an election process carried out on May 24 and 25 with remote voting coordinated by the company EVoting. 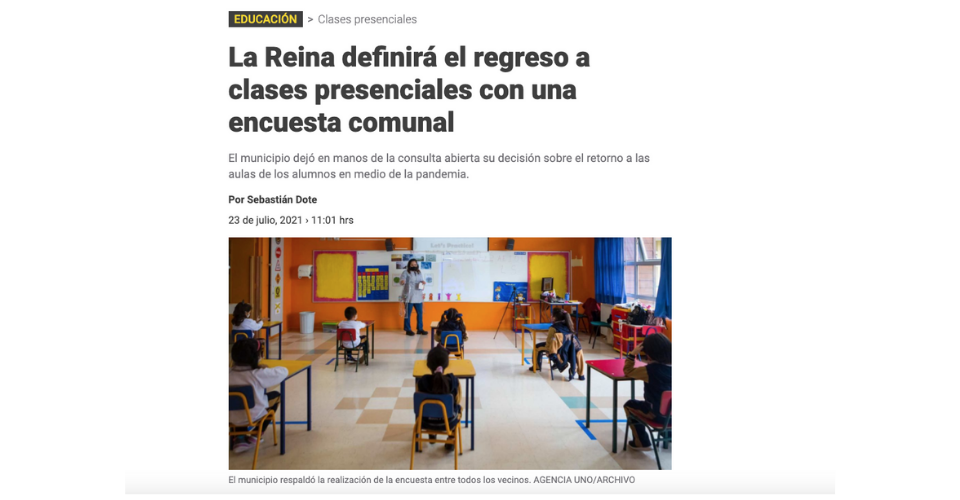 La Reina will define the return to classes with a communal survey.

The municipality left its decision on the return of students to the classroom in the middle of the pandemic in the hands of an open consultation. 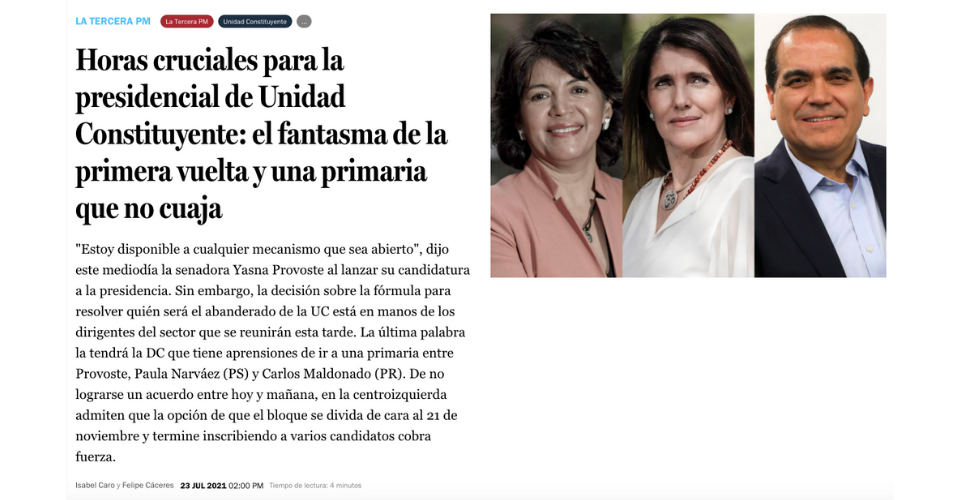 Crucial hours for the presidential election of constituent unity: the ghost of the first round and a primary that does not work out 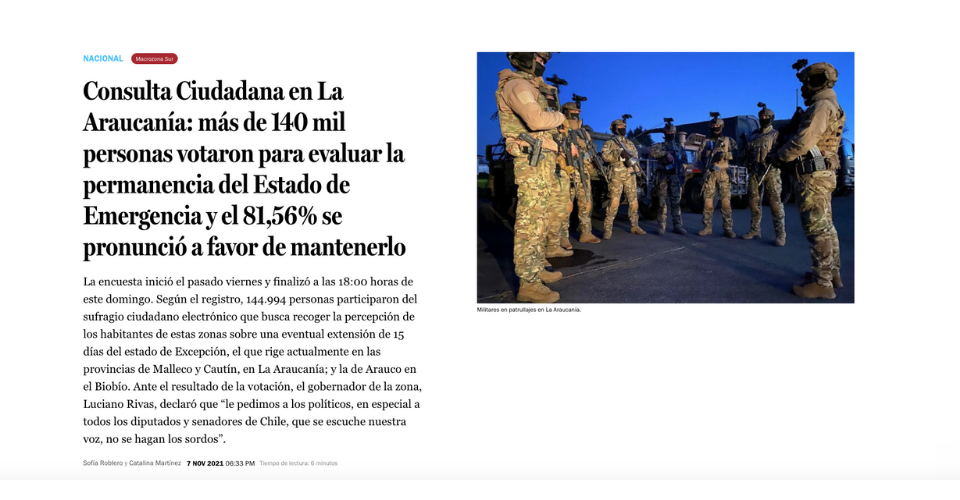 Citizen consultation in Araucania: more than 140 thousand people voted to evaluate the permanence of the state of emergency.

The survey began last Friday and ended at 6:00 p.m. this Sunday. According to the registry, 144,994 people participated in the electronic citizen vote. 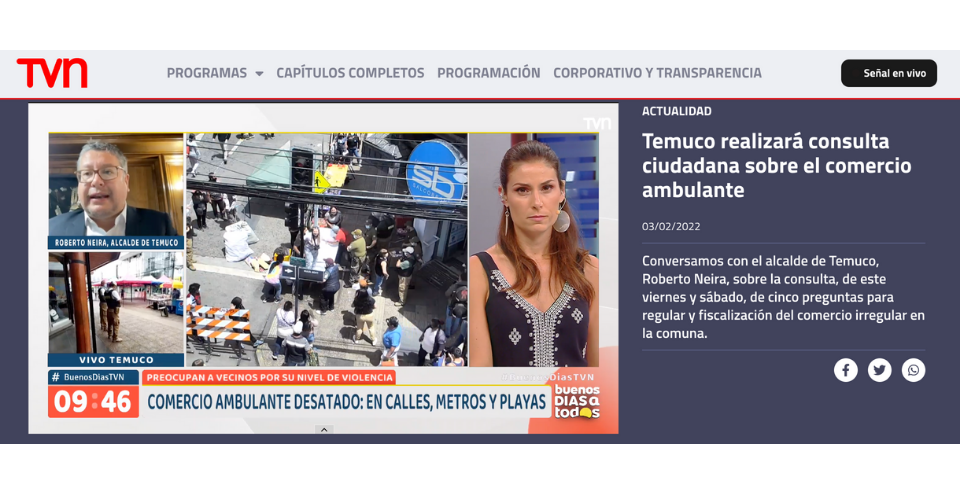 Temuco's Mayor, Roberto Neira, talks about the citizen consultation on the reorganization of the city center.

Participation via electronic voting exceeded 95% and they highlight the smoothness of the process.

With 97% of electronic participation, the first round of the election of the UdeC Rector 2022-2026 culminated. 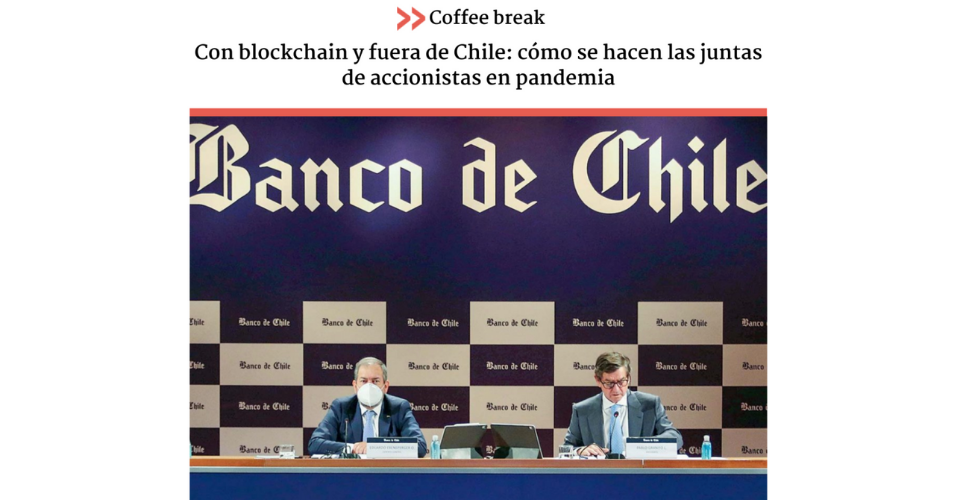 With blockchain and outside of Chile: how shareholder meetings are done during the pandemic.

Shareholder attendance at meetings has increased as they are held virtually.

Almost 30 thousand people have already participated in “BioBío Decides“, a citizen consultation where a series of questions are asked about the adoption of the vehicle restriction measure as well as about the quality of the road system in the Greater Concepción area.

From this Friday begins the citizen consultation for the province of Concepción and Los Angeles, instance where users can express their opinion regarding the problems of traffic congestion in the area. The platform to vote is decidebiobio.cl.

ANEF Elections: “An ANEF for a new Chile“ wins and José Pérez Debelli is reelected as president until 2025

On Tuesday, May 24 and Wednesday, May 25, the online elections for the National, Regional and Provincial boards of the National Association of Fiscal Employees, ANEF, took place. The majority was obtained by List B “An ANEF for a new Chile“, led by the current president of the Association, José Pérez Debelli.

The process that seeks the opinion of the inhabitants, intends to order the central sector of the commune and install parking meters.

The current rector obtained 619 votes in the second round, beating Dr. Jacqueline Sepúlveda, who reached 583 preferences.

With 51.5% of the votes, Carlos Saavedra is retained for four more years as rector of the University of Concepción. With the reelection, he will hold the position until 2026.

Between 09:00 and 17:00 hours the voting process took place to define who will lead the Universidad de Concepción in the upcoming years.

In order and with great participation was held this Friday, March 25, the Election of Rector UdeC 2022-2026.

During yesterday's voting, which counted with a participation of more than 85% of the electorate, Carlos Saavedra and Jacqueline Sepúlveda obtained the first two majorities.

On Tuesday, March 22, the lists will be published, which include the members of the electoral roll with electronic voting and in-person voting.

Governor Luciano Rivas and the mayors of Villarrica and Pucón announced the results: 59.99% voted against the initiative, while 39.96% voted in favor.

More than 11,700 voters participated in the process. "It is not binding, but it has to be an important input when making decisions", said Governor Luciano Rivas.

WITH MORE THAN 10,000 VOTES CAST THE SECOND DAY OF THE ARAUCANIA CONSULTATION: VILLARRICA ROUTE FINISHES

This Sunday the virtual ballot boxes that will give the results to the citizen consultation in which Villarrica, Freire, Pucón and Curarrehue participate are opened.

WITH THE DELIVERY OF ENCRYPTED KEYS TO THE REGIONAL GOVERNOR AND MAYORS OF THE LACUSTRE ZONE THE ARAUCANIA CONSULTATION ON THE VILLARRICA ROAD WAS GIVEN THE GO-ahead.

Do you agree with the construction of a double road between Freire and Villarrica to improve the safety of the route?, is the only question that the inhabitants of Freire, Villarrica, Pucón and Curarrehue will be able to answer.

Voting will take place between February 18 and 20 online, although the municipal authority will have an in-person point at the municipality.

At 8:00 a.m., the electronic election of the National, Regional and Communal directives of the order began. At the same time, the National Electoral Committee received from EVoting the Electronic Keys for the voting.

Federation and for the Superior Council will take place on November 17th and 18th. The scenario will be marked by the online election modality and for being the first elections in the university since 2018.

FEUC ELECTIONS 2021: VOTING WILL BE VIRTUAL AND IN CHARGE OF THE EVOTING PLATFORM.

The EVoting platform was chosen by the FEUC Council after being reviewed with 5 other listed companies, due to the experience in other measurements, such as the elections at the Universidad de Concepción, Universidad Andrés Bello, Universidad Mayor and in the December public consultation of the Association of Municipalities.

EVoting, a Chilean company, seeks to break into the local market with its remote meetings and assemblies and electronic voting services, given the needs and development opportunities generated by the pandemic.

KEY DAY IN THE CHILEAN CHAMBER OF CONSTRUCTION: THROUGH ELECTRONIC VOTING, NEW BOARD OF DIRECTORS WILL BE DEFINED.

Through electronic voting in charge of the EVoting platform, 360 councilors of the guild will have to define the new directive, which is disputed by two lists: List A led by Antonio Errázuriz; and the list B, led by Andrés Arriagada.

The Chilean company EVoting entered the Peruvian market with a platform for non face-to-face meetings or assemblies, or 100% remote operation assemblies.

NO FACE-TO-FACE BOARD MEETINGS AND BOARD SESSIONS TO PREVENT COVID 19.

The Chilean company EVoting, with experience in electronic voting, arrives in Perú with a platform for non face-to-face meetings or assemblies, 100% remote operation, maintaining the transparency and security of the traditional, face-to-face version.

ELECTRONIC VOTING: THE SYSTEM TO BE USED BY THE ANFP FOR THE PRESIDENTIAL ELECTIONS.

From the Quilín headquarters, they opted for a remote service as a result of the pandemic affecting the country. The company in charge of this will be EVoting.

THE ELECTION OF THE ANFP WILL BE WITH SECRET ELECTRONIC VOTE.

In their Quilín headquarters, the ANFP hired the services of EVoting. The ANFP points out that the firm has organized virtual councils and that it has platforms for secret voting, supervised by a notary.

FAUG IS THE FIRST FACULTY TO ELECT DEPARTMENT DIRECTORS ONLINE.

This innovative modality "sets a precedent for, in the future, to expand and ensure the participation of those academics who cannot access to vote physically," said Dean Dr. Leonel Pérez Bustamante.

IN AN UNPRECEDENTED WAY, EDELMAG HELD ITS SHAREHOLDERS' MEETING ONLINE.

As a measure to prevent the expansion of Covid-19, EDELMAG's Board of Directors decided that the 2020 Shareholders' Meeting would be held remotely and hired the services of EVoting, a company with recognized experience in electronic voting.

THE REBIRTH OF EVOTING, THE MOST COVETED FIRM TO HOLD REMOTE SHAREHOLDER MEETINGS IN TIMES OF CORONAVIRUS.

They have received some thirty requests to hold remote meetings, and yesterday they finalized what may become the first fully electronic meeting in Chile.

ELECTRONIC VOTING: WHAT IS MISSING TO IMPLEMENT IT IN CHILE?

CITIZEN CONSULTATION ON CONCEPCIÓN'S REGULATORY PLAN IS SUCCESSFULLY CARRIED OUT.

5,210 people have participated in the electronic public consultation on high-rise building, a process that is part of the Municipality of Concepción’s project to modify its Regulatory Plan.

CONCEPCIÓN: ONLINE CONSULTATION ON MAXIMUM BUILDING HEIGHT WILL BE HELD BETWEEN JANUARY 20 AND 24.

The date has been set for Concepción’s online public consultation on the modifications to the Communal Regulatory Plan that establishes a maximum height for buildings.

A preliminary count of the 29 boroughs which participated through the EVoting platform, shows that 91% were in favor of a new Magna Carta, which -according to the preferences- would be drafted by a Convention that would be integrated only by citizens.

PUBLIC CONSULTATION: SYSTEM ALLOWS TO SEE THE RESULTS BY HOUR THROUGH ELECTRONIC VOTING.

More than 20 boroughs of the country began the citizen consultation process this Wednesday, in a non-binding event organized by the Chilean Association of Municipalities (AChM) that seeks to know the opinion of its inhabitants on a new Constitution for Chile, in addition to issues related to the social and communal agenda.

MUNICIPAL CITIZEN CONSULTATION: EXPLANATORY VIDEO FOR ELECTRONIC VOTING TO BE HELD FROM DECEMBER 9 TO 15 IS RELEASED.

During this week, the Municipal Public Consultation 2019 will take place, where around 200 boroughs from all over the country will participate. The questions will be regarding institutional matters, social agenda, local and regional issues.

MUNICIPAL PUBLIC CONSULTATION: EXPLANATORY VIDEO FOR ELECTRONIC VOTING TO BE HELD FROM DECEMBER 9 TO 15 IS RELEASED.

This week, the Municipal Public Consultation 2019 with the participation of about 200 Chilean boroughs will take place. To partake of this consultation by electronic voting, you must access consultamunicipal.cl or your municipality’s website and enter your ID number to find out if you are eligible to participate.

ALMOST 100 THOUSAND PEOPLE HAVE PARTICIPATED IN THE CITIZEN CONSULTATION ON LIMITING CHILDREN'S TIMETABLE.

An electronic public consultation on whether there should be a time limit for children under 16 years old to be on the streets without adult supervision is being held since 9 am.

IN AN UNPRECEDENTED ELECTRONIC PUBLIC CONSULTATION, RENCA NEIGHBORS DECIDED PROJECTS TO BE IMPLEMENTED IN THEIR BOROUGH.

Mayor Claudio Castro pointed out that this new decision-making process guarantees transparency in a municipality’s spending. EVoting was the company in charge of the scrutiny.

WHAT ELECTRONIC VOTING CONSISTS OF THAT HAS MAYORS EXCITED.

After 77,812 people voted online in the Las Condes, La Reina and Providencia public consultation, where the installation of a Lagoon in the Padre Hurtado Park was discussed, Renca neighbors will decide the destiny of part of the municipal budget, among 7 other projects, with the same type of electronic suffrage.

EVoting avoids people having to mobilize to each voting point and the associated expenses, allowing voters to participate in the process from any electronic device, including their workplaces or other geographical location.

ELECTRONIC VOTING IN CHILE: IS IT NECESSARY? WHAT IS MISSING FOR ITS IMPLEMENTATION?

Experts analyze the technological and practical possibilities of this technology, which is already successfully used in several countries. One of them points to the 2020 elections as a good starting point.

Electronic voting is what this platform proposes.

Chile is one of the countries with the highest number of voting abstention. This is why E-Voting offers a remote voting platform, where by entering their identity card, a person can be represented through their vote.